Myself, I share the well-known Italian music terms that could relate to the tempo into two categories. Adverbs such as adagio, largo, grave, allegro and vivace refer rather to a particular character than to a certain tempo. Adverbs such as lento, moderato, presto refer to the tempo at which you play.

It is quite possible to play allegro at a moderate tempo (moderato). Adagio will not associated with a fast tempo (presto), but actually does not always have to be played slowly (lento).
However, the margins remain high in all cases.

Late in the 18th century adverbs related to temporal changes of tempo like ritardando and rallentando start to appear in the texts. The fact that these adverbs were only recorded in the score in the late 18th century does not mean that before that time one never slowed or accelerated the tempo. Just look at the hard to translate introductions from Frescobaldi’s Toccate e partite d’intavolatura di cimbalo, libro primo (1615,1616)

Reliable translations can be found in the edition of Christopher Stembridge and Kenneth Gilbert, published by Bärenreiter: Frescobaldi. Organ and Keyboard Works I.2 Toccate e Partition d’intavolatura … .. Libro primo (1615 & 1616).

An additional comment on the instruction piano. In most cases, this is an instruction to moderate the volume. But sometimes it can also be associated with a small delay of the tempo. Reducing in volume and tempo simultaneously.

All this merely an introduction, because I would like to draw the attention to the concept of adagio.

Adagio is translated as: at ease, take your time. 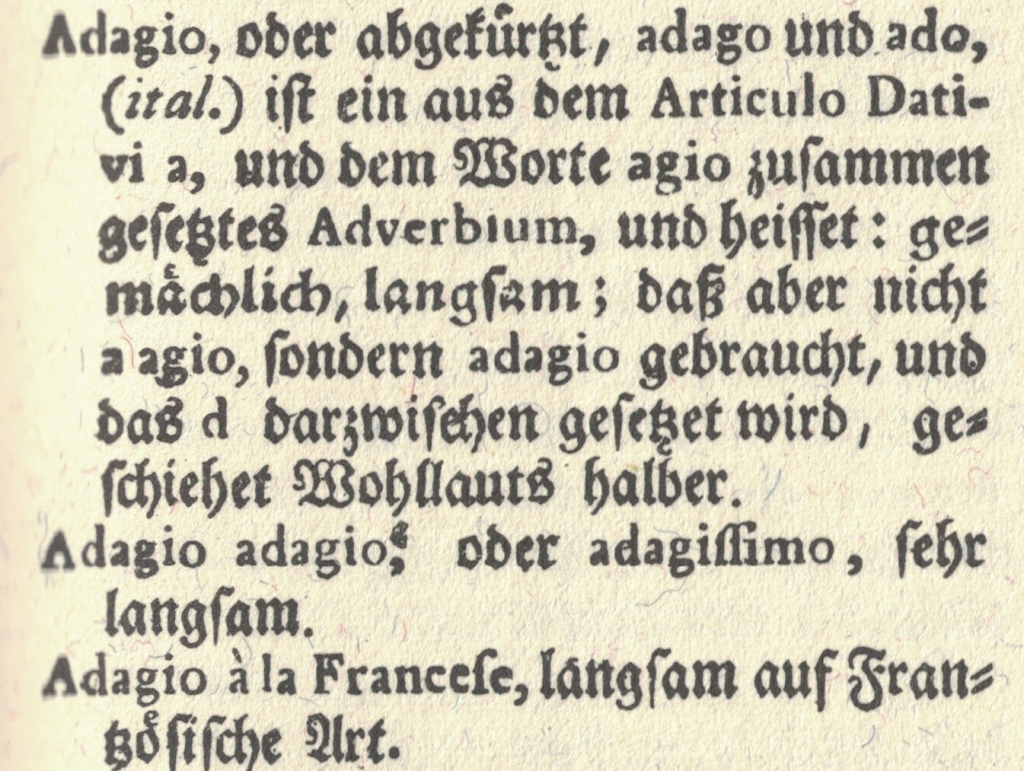 The addition of adagio also occurs in polyphonic pieces and be in places where the strict style, the contrapuntal style, is interrupted by the insertion of a passage in the free style. Instead of adagio, ad libitum is sometimes used ad. In such case this does not mean that you may omit the relevant passage, but that you are invited to play the passage following your own understanding.

And now finally the point for which I want to politely ask attention.

At the start of each piece I am about to practise or study I write in my mind adagio, even though the composer prefers vivace, allegro or presto.

I play each piece adagio as good as I can, con espressione, and I will not shy some exaggeration (almost as the late Glenn Gould). In doing so, I have all the opportunity to pay attention to punctuation, motifs, rhythmic nuances, harmonic changes, fingerings, hand positions, playing movements, the inner experience of the playing movements (proprioception), playing techniques (legato, non legato, over legato etc.), embellishments, tone quality etc. etc.
Regularly I check what my hands are doing on the keyboard. Very useful in difficult passages and complicated decorations.
Musically, all is very intense (intrinsic motivation and mindfulness avant la lettre).

In this way I also have all opportunity to estimate the quality of the composition. Naturally, it is always better to omit snorting and humming.

We can also apply foregoing in certain defined passages, for example, when a composition starts with long notes and towards the end shows an accelerating movement. (The Cabezon, Sweelinck, Byrd, etc.)

Whether this approach works practicing the later piano repertoire (Chopin, Liszt, Ravel, Debussy)? I do not know. But in this case that is of no interest. Anyway, it works well for me for music from the 17th and 18th centuries.

In the way described above, we enrichen the content of the well-known classic study recommendation to study slowly. But boring or tedious exercise is not at issue here. We always play a wonderful adagio. Musical pleasure from beginning to end.

Albèrt de Klerk: “Never play faster than you can read.”

How much adagio is required and how often to repeat a piece of adagio depends on the skill of the player, of course. A few days consecutively? Intervals of days, weeks? Recommended study methods should always be applied flexibly.

It is also advisable to play pieces that you know well adagio. A fresh look at familiar things is always needed.

Secondly, I’m going to see how I can accommodate the wishes of the composer in tempo and character. The point is that you should be able to play an allegro, presto or vivace easily and at with ease. In other words, adagio. A little like for instance the late Arthur Rubinstein.

This calm way of study can also be found outside the music. For example, in the martial arts of the Far East. Some smart people over there. I admire tai chi masters, with their well-known ever slow performed exercises. It’s amazing how, when it comes down to it, they know how to work their opponent to the ground in an instant.

Finally, I want to say that playing this adagio is even better and more comfortable on a clavichord. Dynamic differences are easier to implement on this instrument than on harpsichord or organ. A clavichord is a good investment for any harpsichordist and for every organist occupied with early music.