This too crosses our path. Nothing is spared from us, early music enthusiasts.

Often we have to play embellishments that are not in the score. Frequently we have also to play a different rhythm than is written down in the score.

A well-known example of this is found in the Courante from the French Suite IV (BWV 815) by J.S. Bach. Here the intention is that the dotted rhythms are aligned with the triplets.

More suggestions in the following example.

By the way.
For the musical marathonrunners among the organists there is a good puzzle in Bach’s Vater unser im Himmelreich à 2 Clav. Et Pedal e Canto Fermo in Canone (BWV 682). Stating in particular: the occurring dots above or below the notes are accent marks, not staccato.

A less well-known example.
In J.S. Bach: Sarabande from the French Suite V (BWV 816) we encounter the following issue.

For more than two centuries, we assume that a dotted note prolongs this note by half of its value. In the 17th and 18th centuries indicated a dotted note also an extension of that note, but the length of that extension was not fixed.
A double dotted note was never written down, however it was played.

Also unusual was a rest with an extension dot. Here the intent also should be derived from the context.
See the following example:

Another interesting case is presented to us by J.S. Bach in the first part of the Ouvertüre nach Französischer Art, Clavier Übung II (BWV 831). During his life this work has appeared in print. This piece is in B minor. But a handwritten version of the same work  is also known to exist, which was in C minor (Edited by Hans David at B. Schott’s Söhne). Immediately striking are the differences in the notation of the rhythm. 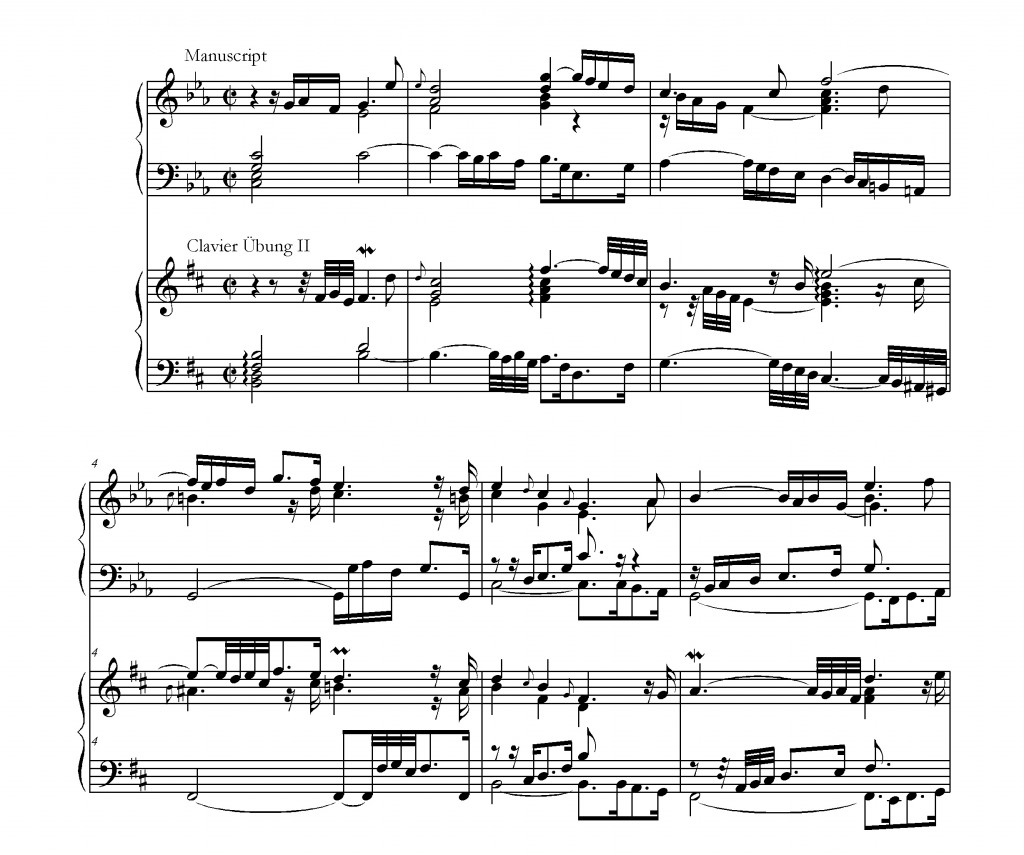 Perhaps foregoing includes nothing new. But to my great sorrow, I still regularly hear performances from which this is not apparent.
One of those cases where the performer just plays what is there, but where he should play what is not there, is the Präludium in F major by Georg Böhm. The title of this piece is does not cover the load, so to speak. It is clear that here we are dealing with a so-called French Overture. The consequences for the performance, as I see it, I have worked out in the following example.