Playing historic organs has its adventures and even sporting sides.
It starts with the access to the organ. Sometimes you have crawl and sneak your way in. Claustrophobia is not convenient here. Also, always make sure that you do not bump your head. On the way back it is often advisable to descend the stairs reversed.
It could also happen that you have to climb a creaky wooden structure to great heights. Vertigo.

The organ itself.
Interesting organs are never standard. Every organ is different in construction and possibilities of sound. The spaces in which organs are located and accompanying acoustics differ greatly from one another. This makes the whole enterprise so interesting.

Organs were not built to be ergonomic, especially in the 17th and 18th centuries or before. Therefore, it is often difficult to find a good playing posture. A third or fourth keyboard for example, can be just a little too high and too far away from you so you have to play with arms outstretched or above shoulder height. The pedal may be too far rearward so you are always in danger of falling over. On the larger organ you nearly capsize heeling when operating the outer stops.

The literature itself can also make things difficult for the player, such as the trio sonatas by J.S. Bach: two solo voices played simultaneously with two hands on two different manuals in the soprano; the bass is played with both feet on the pedal. Thus, the left hand plays mostly to the right of the body. That is uncomfortable in the long term (such a composition can take at least 20 minutes), certainly while practicing.

A possible solution to this problem is being offered by Georg Friedrich Kauffmann.

In the preface, we find this passage:

My rather free translation of the text above reads as follows:

We are of the opinion of the following: when you can have two manuals and you want to use two similar registers (eg principal, 8 and 4), then you can use in this case in the left hand the principal 4 and just play that voice an octave lower. So it seems as if you’re playing the two voices on the same keyboard.

In any case, this can be useful when practicing.

In this regard, one may wonder whether the blind Jan Jacob de Graaf (1672-1738), organist at the Nieuwe Kerk in Amsterdam, used this option when showing his skills. He played transcriptions of Italian contemporaries such as Albinoni, Corelli and Vivaldi on the organ.
With this he enjoyed great admiration from foreign colleagues.
See below the quotation from Walther Musikalisches Lexicon of 1732. Jan Jacob de Graaf called as Johann Jacob Grave. 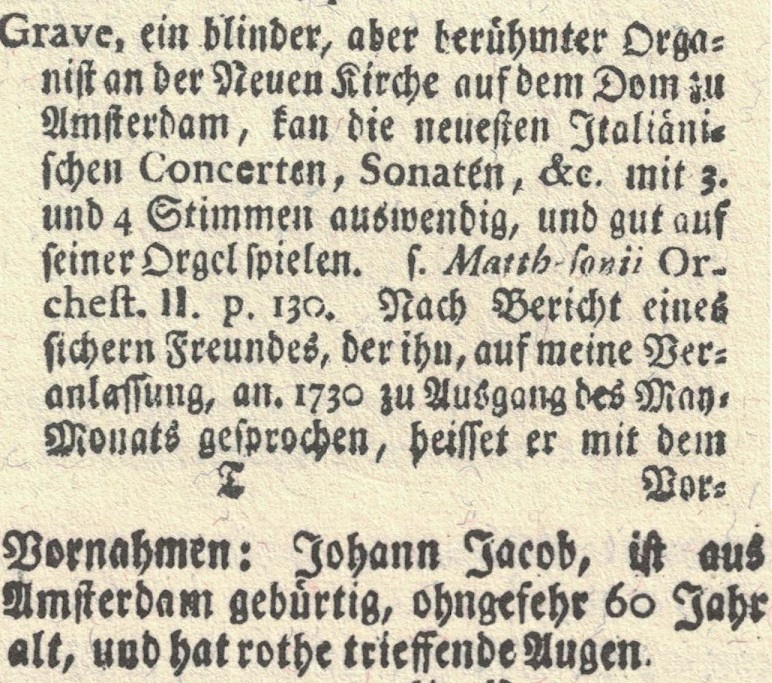