Usually, this term is used to refer to a quiet tempo; walking quietly. Andantino indicates the walking pace should be slightly less calm, a little faster.

However, in the 18th century it could be that the indication andante did not concern the tempo of walking in the first place, but rather the uniformity of the steps.

The above mentioned of course only applies to the pieces which are written in the Baroque style, the basso continuo style.

For example, in the sonatas by Domenico Scarlatti (like J.S. Bach and Handel born in 1685), the basso continuo style has been let go. These sonatas often come two by two. When the first Sonata has to be played andante and the second allegro, it is clear that this is only to indicate the differences in tempo.

In the 18th century, it could be that the indication andante does not relate to the tempo of the walking, but to the uniformity of the steps.

In practice, this usually means that the eighth notes (in particular in the bass) are all played with same length. And preferably also a little separate.

When one considers that every musician at the time, not only in France, adored  ‘inégalité’, then one thing becomes clear immediately: andante above a piece of music indicates that the composer for a moment just wants to be free from the constant hopscotch.

So, since in the 18th century andante mainly indicates the regularity of the movement (the deactivation of the inégalité) and not in the  tempo thereof, it will surprise us less if we encounter, for example, the combination andante-presto over a piece of music.

In applying the knowledge above, we must of course ensure that we do not go marching. Our walk in equal steps must remain elastic and musically interesting. Not like a military parade or anything like that.

Attached are some sources. They are in a pleasant way unanimous. The following quotes bear witness thereof. 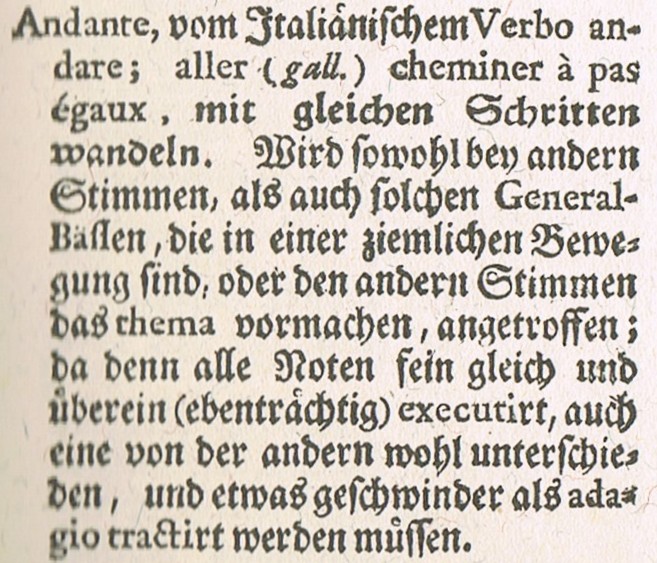